Only 20% of German patients take the new modulators

In Germany, over 80% of patients with F508del/F508del mutation and their doctors decide against Orkambi (lumacaftor/Ivacaftor): In 2016, the usage is 6,8% for children and adolescents and 19,3% for adult patients. Patients with gating mutations (e.g. G551) decide differently: Kalydeco (ivacaftor) is used by 69,6% of children and adolescents and 77,6% of adult patients.

The price of Orkambi

In Germany the price of Orkambi for private and public health insurances is 169.241 €  per year and patient.

Although the outcome of the negotiations on pharmaceutical prices is not transparent in Germany, it nevertheless becomes widely known: Since the AMNOG regulated by law that the drug price of the public health care system also applies to private insured persons and self-payers (see § 78 (3a) AMG), the prices can be viewed through the pages of mail order pharmacies.

The approved CFTR modulators developed by Vertex Pharmaceuticals are too expensive for the clinical benefit they can provide to cystic fibrosis (CF) patients, according to the Institute for Clinical and Economic Review (ICER, an independent nonprofit organization that seeks to improve healthcare value by providing comprehensive clinical and cost-effectiveness analyses of treatments, tests, and procedures).

ICER evaluated the effectiveness and costs of Symdeko (tezacaftor/ivacaftor), Orkambi (lumacaftor/ivacaftor), and Kalydeco (ivacaftor) in comparison with best supportive care available for three distinct populations representative of main genetic mutations involved in CF. The review board found that Orkambi and Symdeko could provide only small and small-to-substantial net health benefits to patients with two copies of the F508del mutation in the CFTR gene (the gene that is defective in CF).

Analysis of the drug’s costs showed that for all CF sub-populations analyzed, they far exceeded the value that is commonly accepted as the thresholds for cost-effectiveness, which is of $100,000-$150,000 per quality-adjusted life year gained. To align the financial burden of these therapies with the clinical benefit reported, ICER members recommended the net prices should be reduced 71 to 77%. Dan Ollendorf, PhD, chief scientific officer of ICER: “The current prices for these drugs produce overall costs that are far in excess of those needed to reach commonly cited cost-effectiveness thresholds.”

Breaking the Access Deadlock to Leave No One Behind

A contribution by EURORDIS and its Members on possibilities for patients' full and equitable access to rare disease therapies in Europe, January 2018

Link to the complete report

Rare disease patients deserve the same level of quality of care as any other citizen. That principle was proclaimed as a fundamental choice consciously made by society as a basis for the EU Orphan Drug Regulation. Main incentives offered by the orphan drug legislation are scientific advice and protocol assistance (with fees’ exemption), the orphan status and the market exclusivity.

The success of the regulation on orphan medicinal products (OMP) is proved by the numbers. Until now we have 142 authorized OMP, to date 99 with marketing authorization and orphan status (08/11/2017). However, our daily experience provides countless examples of situations when the price of a new orphan medicine proves to be the stumbling block on which manufacturers and payers fail to agree, with potentially dramatic consequences for the patients in need of access to therapies. Some “high-price-by-default” policies of certain individual companies, with little or next to no justification other than what the market is perceived to be able to bear, have earned orphan medicine manufacturers a widely negative reputation.

Eurordis sets the aim to have 3 to 5 times more new rare disease therapies approved per year, 3 to 5 times cheaper than today by 2025.

Eurordis sets out a four-pillar approach that encompasses:

Yann Le Cam, EURORDIS Chief Executive Officer, commented, “we need to close the gap between innovation and access. All stakeholders have an urgent collective responsibility to shape a new approach that will accelerate the translation of major scientific advancements into new therapies.”

US Cystic Fibrosis Foundation sold royalties for CF-modulatros and got $3,3 billion

Summary of an article printed in The New York Times

About 15 years ago, the Cystic Fibrosis Foundation gave $150 million to VERTEX to entice it to develop new drugs for CF. In 2014, the foundation sold the rights to the royalties to those drugs and got $3.3 billion. The payout is believed to be the largest financial return ever achieved for a charitable organization pursuing treatments for disease.

A higher price of the treatment perhaps means higher royalty payments. “I would like to see them do more to get the price of this drug down to something that is going to be sustainable,” said Paul M. Quinton, a cystic fibrosis researcher at the University of California campuses in Riverside and San Diego, who has the disease himself. 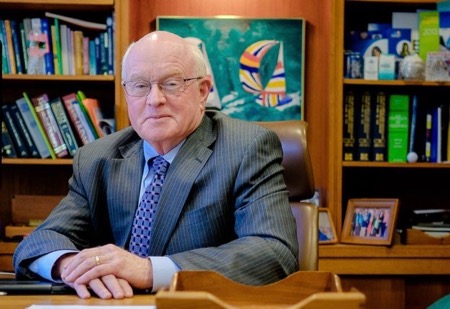 Robert J. Beall, chief executive of the Cystic Fibrosis Foundation, which helped finance the development of a treatment (Foto: T.J. Kirkpatrick for The New York Times).

Robert J. Beall, the chief executive of the Cystic Fibrosis Foundation, said the organization had no power to set the price. Wall Street analysts project that the family of medicines could eventually have sales of several billion dollars a year. The foundation sold the rights to future royalties to Royalty Pharma, an investment firm that specializes in buying such assets, for a one-time $3.3 billion payment. Royalty will profit if, over time, the royalties amount to more than it paid.

The foundation gave its first money in the late 1990s to Aurora Biosciences, a small San Diego company, to see if its technology for screening compounds could find drugs that might work for cystic fibrosis. Vertex acquired Aurora in 2001 for the screening technology. Cystic fibrosis was not a priority, and Vertex officials have said the program might have been dropped if the foundation had not been paying for it.

“This was a dramatic example of risk-taking that has paid off in a remarkable way,” said Dr. Francis S. Collins, the director of the National Institutes of Health, who co-discovered the gene behind cystic fibrosis in 1989 while at the University of Michigan.

#yesorkambi: We should remain honest!

„During the now 1,000 days since the cystic fibrosis medicine Orkambi was licensed in the UK, more than 200 people who may have benefited from this life enhancing and potentially life prolonging drug have sadly died.“
This implies that these lifes could have been saved with Orkambi. But only one of five patients take Orkambi in Germany because of its severe side effects, especially in very ill patients. It´s therefore unlikely that these 200 patients would live, if Orkambi would be reimbursed.

„People in the UK with cystic fibrosis are denied live saving drugs“
Orkambi improves lung-function for 2,5%. It is unproved that Orkambi saves live.

„Orkambi could add 20 years to the lives of Cystic Fibrosis sufferers in the UK.“
Where does this figure come from? Vertex made wired computations and ended up with very questionble 7 years. But yet nobody knows how many years Orkambi would add.